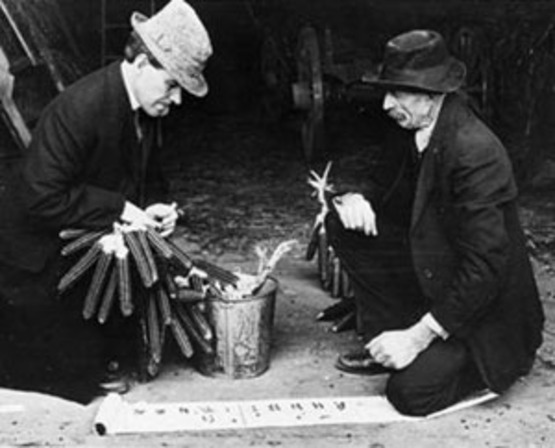 In 1910, Secretary of the Binghamton Chamber of Commerce, proposed a department in the chamber as a means of “extending to farmers the same opportunities now enjoyed by the businessmen of this city”.

A graduate of Cornell University was offered employment as the first County Agent of the new Farm Bureau. His name was John H. Barron, and he began work on March 20, 1911.

Working with a somewhat skeptical audience at first, John Barron quickly learned that he could not do the job alone. James Quinn was elected the first president of the new Farm Bureau and a board of directors was established. The notion of “farmers helping farmers” was firmly taking root.

The county agent became a source of reliable information and a connection to the latest breakthroughs from the University. The County Agent was trusted because of their knowledge of science, but also because they understood the real-life problems that farmers faced.

In 1955, Cooperative Extension and Farm and Home Bureaus separated. Extension would focus on education activity and Farm Bureau would work on behalf of farmers in policy development and the support of specific legislation.

Today, Cornell Cooperative Extension is a national leader in creating positive change on behalf of families and communities though rigorously-tested extension programs. We create measurable change in five priority areas by aligning local needs with the resources and priorities of the land grant system and its state and federal partners.